Flick and Swish School Supplies with a Fast-Paced Dice Game for Harry Potter Fans – Available Now from The Op!

Back to School always has the family scrambling to prepare, and the list of needed supplies is sure to cause a frenzy. Random objects are taken or tossed, and it’s everyone for themselves in an operation to organize! If only there were way to put that focused, dedicated energy into an exciting game, heading into all new classes would be way more fun and less of a mess!

Good thing The Op can take familiar pop culture frenzies and put them into fast-paced, nonstop dice-rolling games with the rush of a race—and new ways to “clean up!” For fans of the Wizarding World, it’s Harry Potter™ Mischief in Diagon Alley, which lets players flick and swish their way to victory, and it’s available now!

In this “frantic race to prepare for Hogwarts™,” students have just received their letters of acceptance into Hogwarts™ School of Witchcraft and Wizardry, which means it’s time to head to Diagon Alley™ for first-year school supplies. But a mysterious hex has mixed up all the Shoppes, scattering brooms, wands, and other magical items everywhere but in the right place!

To win, help organize the Shoppe you’re in by tossing out the supplies that don’t belong to it, while grabbing the stuff that does! Is your eye on Eeylop’s Owl Emporium? Keep the owl tokens that are there, remove the frogs and books, AND take any owls you spot from someone else! Only when you’ve sorted out the store’s usual supplies, shout “Mischief managed!” and claim three Galleons for your handiwork. The other students will either gain or lose Galleons depending on what they’re left with. The first student to earn 11 Galleons wins the game! 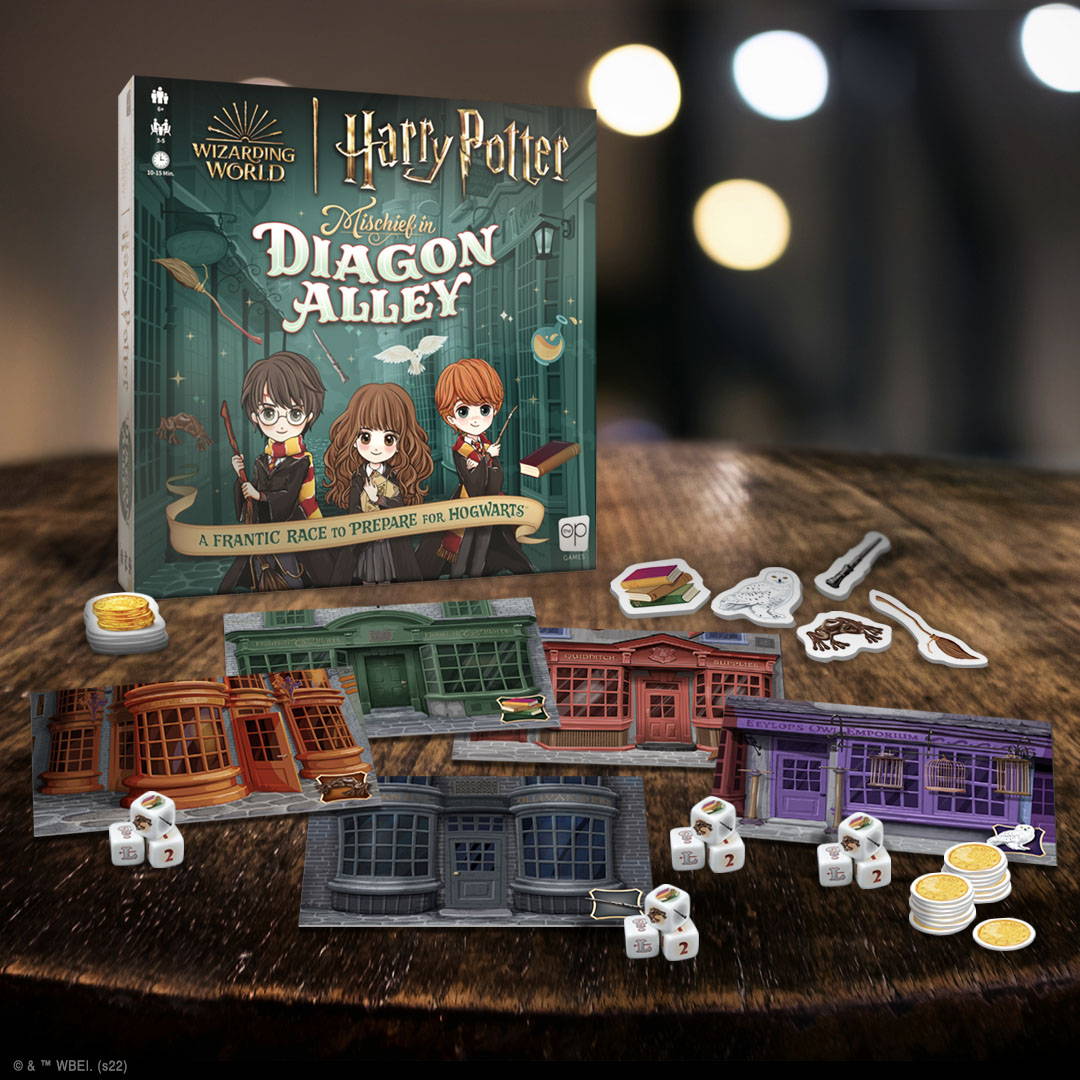 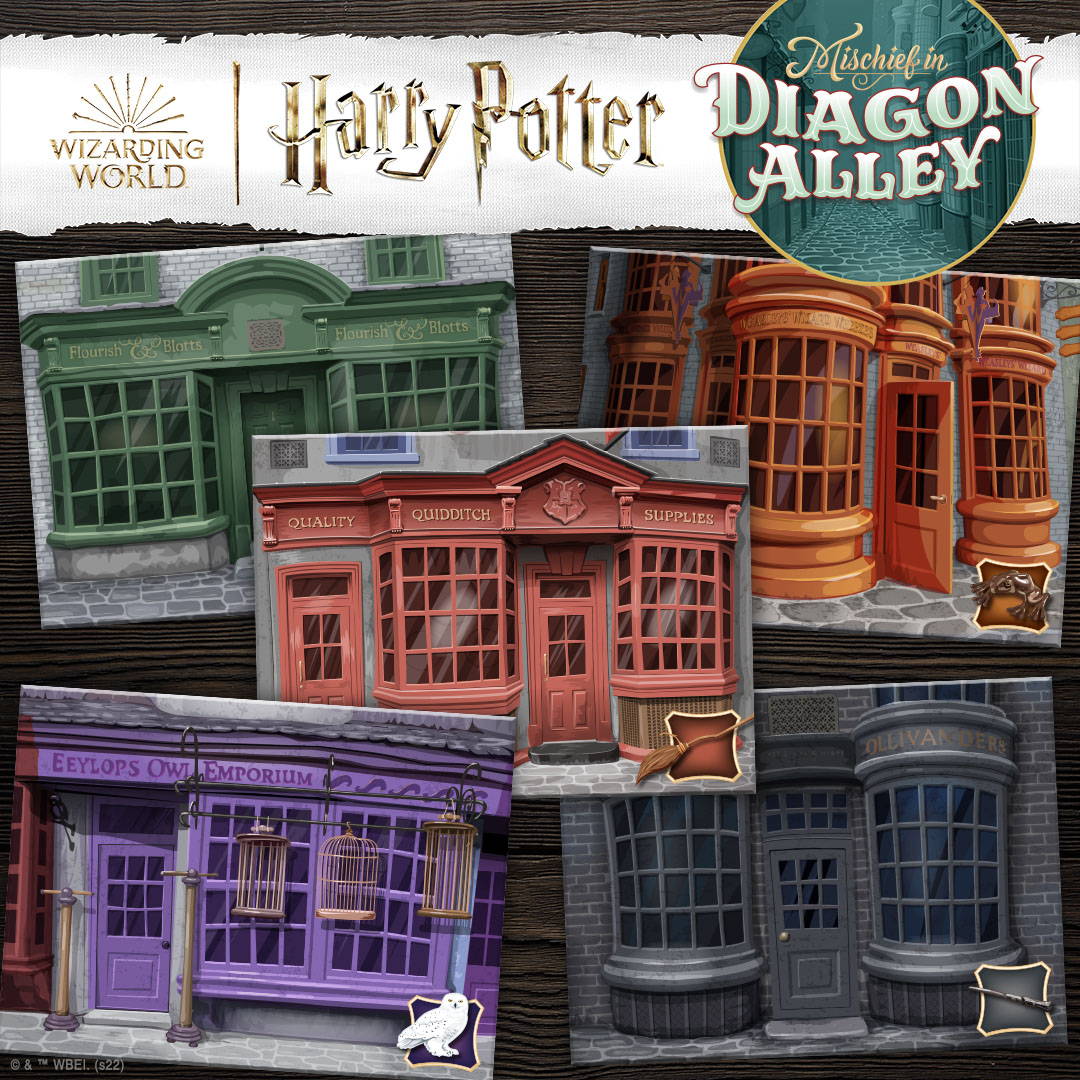 This simultaneous action game calls for fast reflexes, as all players will be repeatedly rolling their own sets of dice at the same time to find out how to make each move: what token to toss from their player board, how many, and where! It can be to their left, right, or the center of the table. Since you’ll also get discards from competitors on both sides, trying to isolate one kind of token will seem endless! Keep rolling and flinging (and likely laughing, if you’re doing it right)!

Mischief in Diagon Alley can also be played multiple ways to really crank up the chaos! Alternate rules can limit the tokens you can access, require you to complete a set, or simply collect the most! Just when you think you’ve got a strategy down, you’ll have to change your plan to work with each variation. As an additional option for younger players, the rules allow children to play using only token and direction dice, letting them move all of the items of that type (instead of a specific quantity). Modify these as needed to keep everyone engaged!

Harry Potter™ Mischief in Diagon Alley is made for 3-5 players, ages 6 and up, and is here in The Op’s online shop and your favorite local game store for 24.99! Celebrate your love for the wizarding world by taking home a box and get ready for your first year at Hogwarts. To play the same crazy game mechanic but in different settings, pick up Disney Tim Burton’s The Nightmare Before Christmas Merry Madness, Astro Trash, or Disney Mickey and Friends Food Fight! For a dedicated theme all about your favorite Hogwarts characters, check out our selection of other Harry Potter products available in The Op’s online shop. Which story suits your interest the most? Share your mid-air token moments by tagging @theopgames or #theopgames in your game night pics for a chance to be featured on our Facebook, Instagram, Twitter, or TikTok!

Other Harry Potter favorites you may love!