Unite Your Tribes to End the Hundred Year War in Avatar The Last Airbender: Fire Nation Rising–Available Now from The Op!

When unknown hero Aang was released from a glacier by waterbending siblings Katara and Sokka, there was no telling the adventures ahead as they learned he was the world’s destined Avatar, a skilled master in controlling the four elements. But as the dangerous Fire Nation continues to threaten their once-peaceful nations, it’s up to Aang and his friends to restore balance to the world... and now you can help them win!

You won’t need to hone your bending skills to play this exciting new addition to the Rising lineup by The Op Games. Featuring a wide variety of characters from the award-winning Nickelodeon series, this cooperative card and dice game relies on light strategy and luck to stop the Fire Nation and their leader, Lord Ozai, from reigning supreme. Ending the century-long conflict will take place in two parts: assemble Heroes against Villains to prepare for the Day of Black Sun, where your progress then comes into play in three important Final Battles!

Five fan favorite characters will lead up to five teams towards the victory: Aang, Katara, Sokka, Toph, and Zuko. Using designated dice pools and unique abilities, players will be able to add other Heroes to their team and deal more collective damage to the enemy. Representing them is an imposing custom sculpt of Lord Ozai, who will also have turns to aim damage wherever the Fire Nation cards direct him. 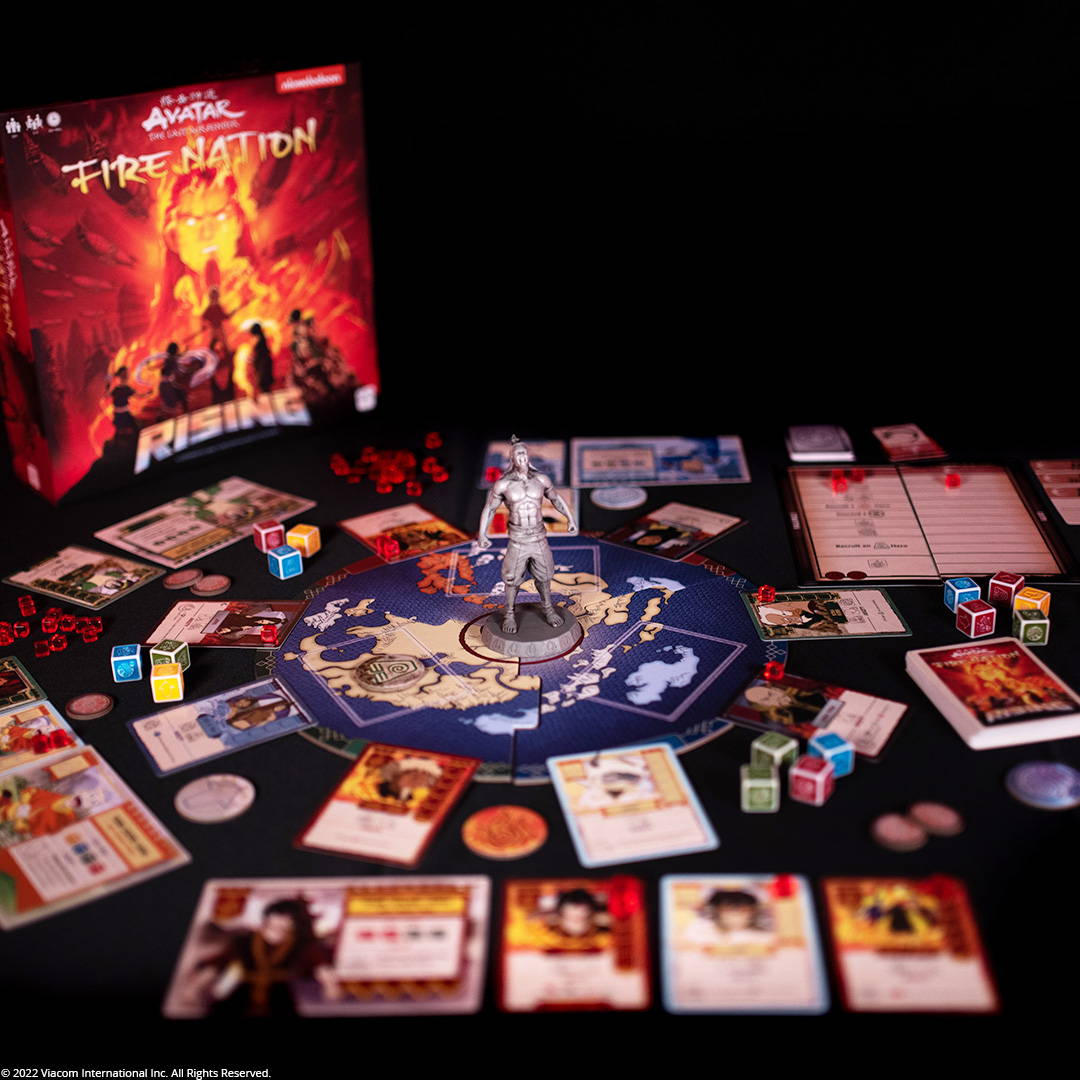 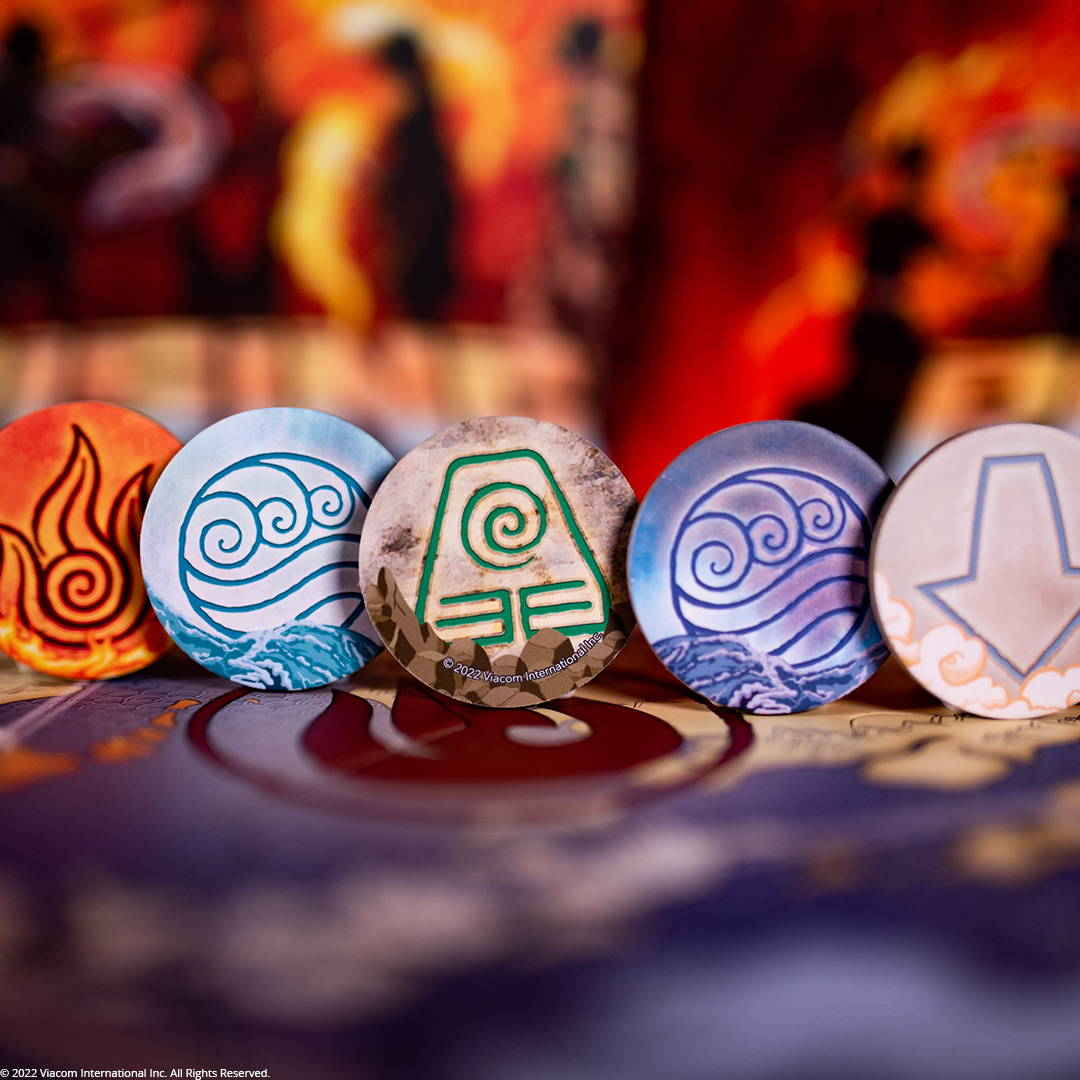 Among the allies, players will find protagonists such as Guru Pathik and Avatar Kyoshito help along progress on the eclipse track, which counts down the Day of Black Sun. Players can arm themselves for the final battles with Balance, which is gained by completing chosen objectives.
he Fire Nation’s measure of success is Ruin, which Villains like Ran & Shaw or Jeong Jeong can add to unless they are defeated! Get through the Battle at Wulong Forest, Battle at Ba Sing Se, and Battle at Fire Nation Palace without losing 10 or more Heroes, or without one player losing all of their Heroes, to keep the Fire Nation from ruling all!

Avatar: The Last Airbender Fire Nation Rising is for 1-5 players, ages 10 and up, and is available now for $49.99 from The Op’s online shop or your local game store! Master Pakku once said during training, “With fierce determination, passion, and hard work, you can accomplish anything”—which is why solo rules are also included for the single player that has what it takes! For other ways to fight for your honor with this popular franchise, check out The Op’s additional accessories for fans, including Avatar: The Last Airbender Card Sleeves, the Avatar: The Last Air Bender Premium Dice Set, regular Dice Set, and RUBIK’S® Cube! To complete your collection of the entire Rising range, have your choice of Harry Potter™ Death Eaters™ Rising, The Batman Who Laughs Rising, and SpongeBob SquarePants: Plankton Rising.

How will you pursue your destiny? Whether you win or lose in your team effort to rise and fight, tag us with @theopgames, #theopgames, or #FireNationRising in your game night photos for a chance to be featured on Facebook, Twitter, Instagram, or TikTok!

Check out these other great Avatar: The Last Airbender Collectables!