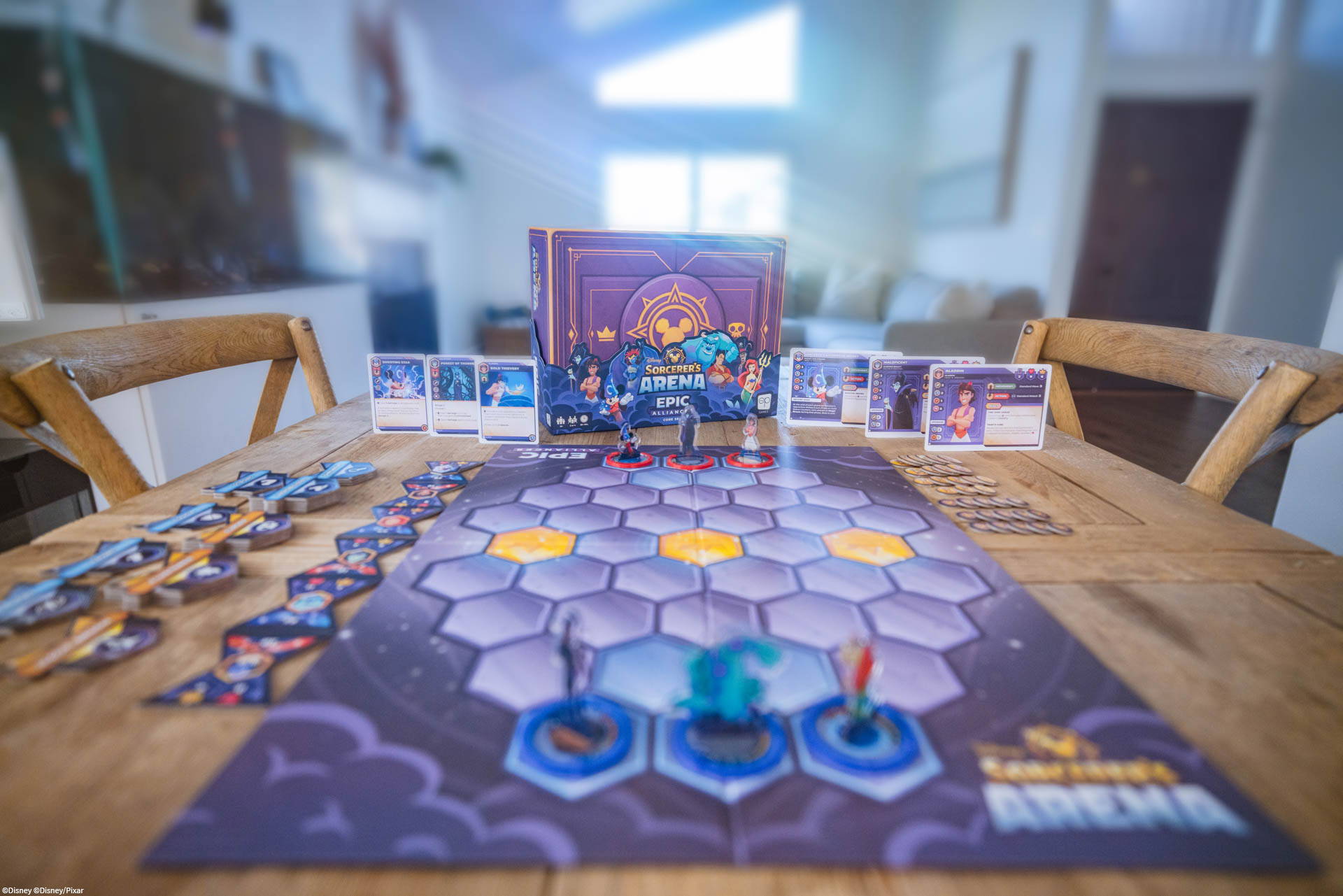 As a fan myself, Disney fandom, for me, isn’t just something enthusiasts like—it’s a way of life. It’s something I’ve seen and believe entire communities form around, with millions of people weaving Disney and Pixar films, television programs, theme park experiences, and licensed products into the fabric of their lives. And this is not only my experience as a game designer creating these cherished and much-loved experiences; I’m also simply one of many fans in a larger global, multi-generational community.

In 2020, Glu Games Inc. launched Disney Sorcerer’s Arena, a mobile game that combines turn-based RPG with card-based combat and fighting gameplay. It allowed fans to pick teams of Disney and Pixar characters, including heroes and villains from animated films, live-action features, and even nostalgic cartoons, and send them into battle against other teams. Players became “Summoners” in the Sorcerer’s Arena, able to build a collection of characters out of a deep and ever-growing roster. In the two years since, the game has inspired players and content creators to grow an incredible online community of dedicated fans as they competed against one another and worked together to discover bigger and better synergies and gameplay strategies. 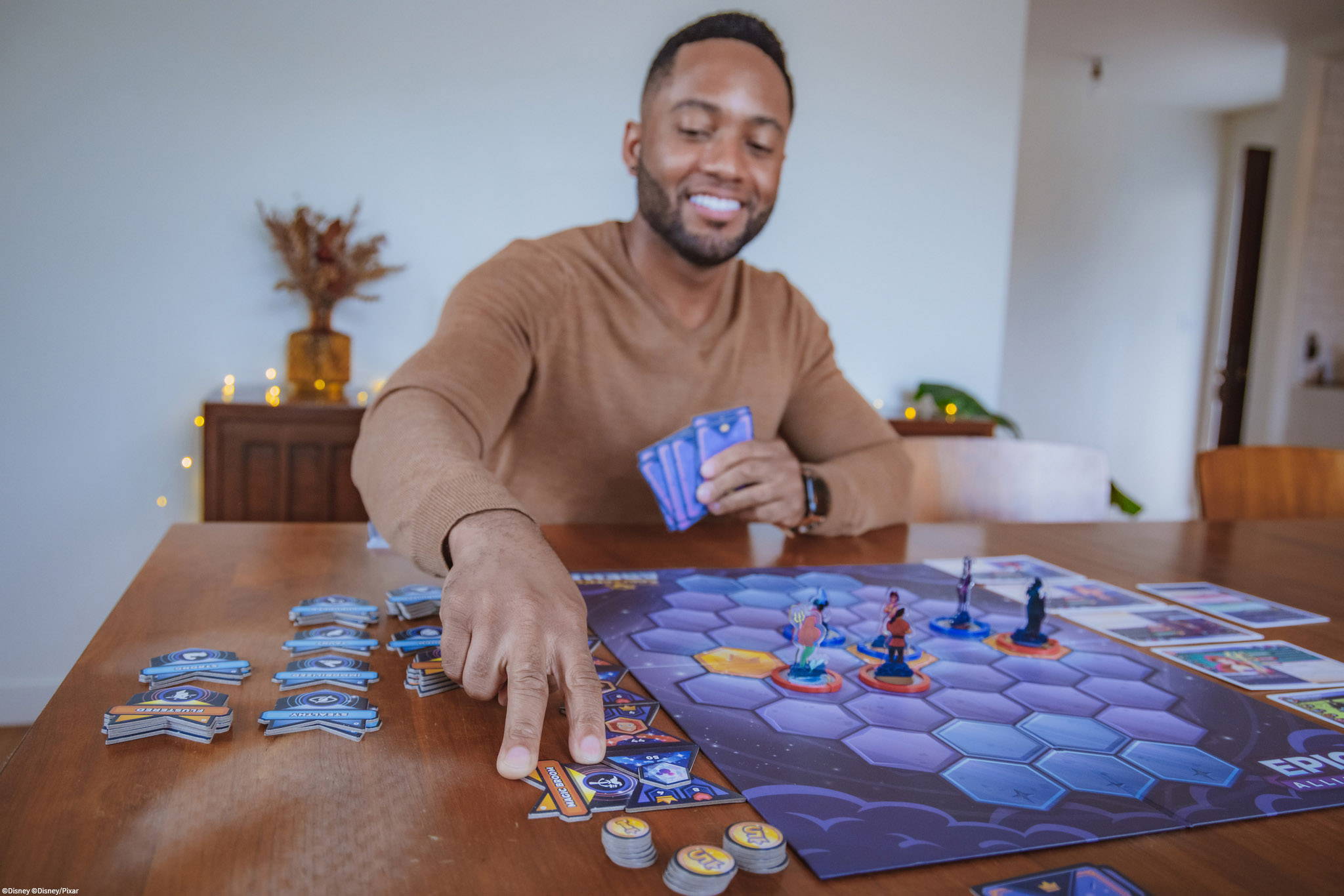 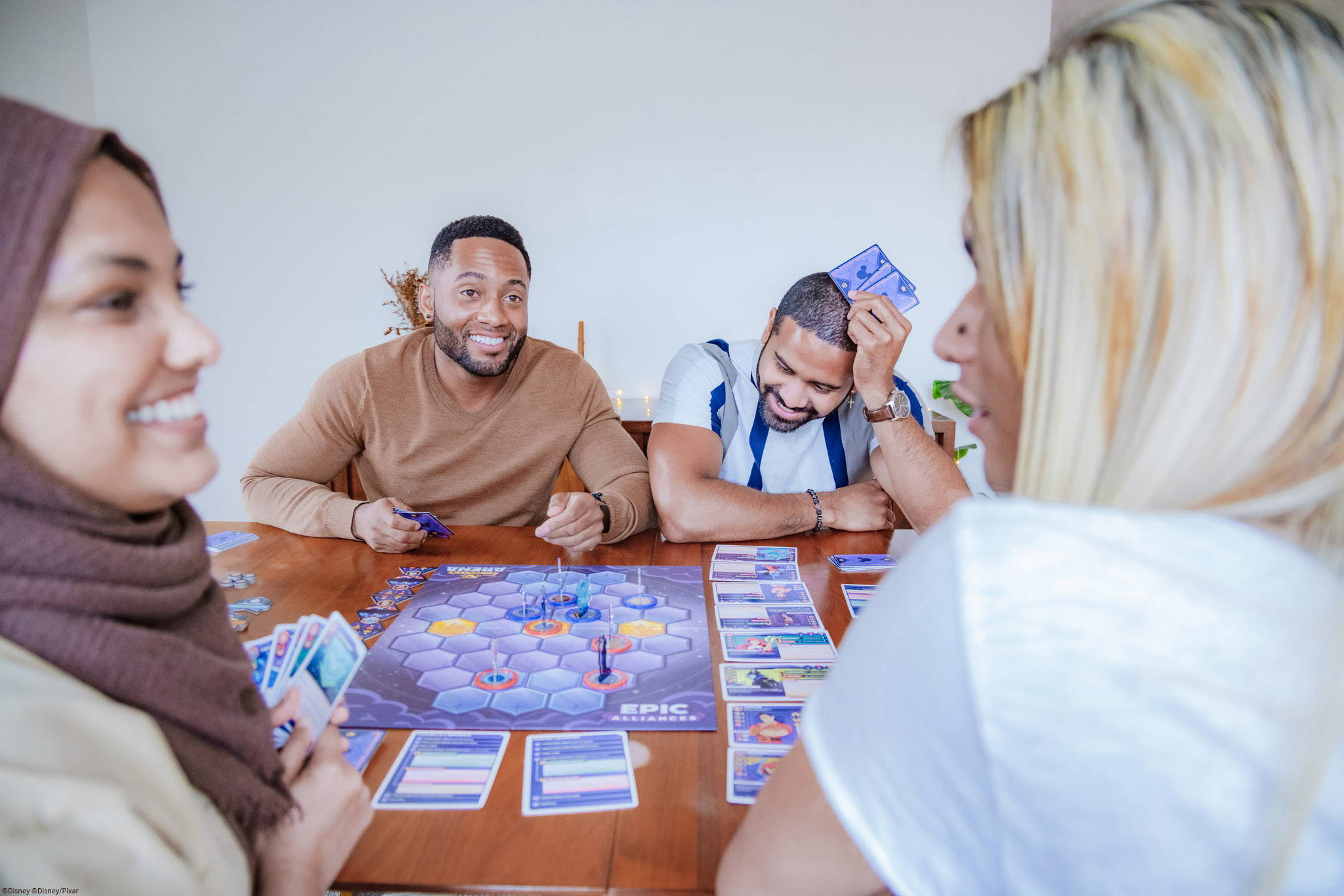 Around the same time as the mobile game’s debut, Disney approached The Op with the opportunity to adapt Disney Sorcerer’s Arena into a tabletop board game. As a Senior Game Developer at The Op, it was an instant, easy decision. I was on board 100%, seeing a multitude of reasons to want to work on the project. I have an affinity for many of the characters featured in the video game, with their personalities and abilities interpreted so authentically in gameplay. I was also drawn in by the degree to which fan-favorite characters across a variety of fictional worlds could interact with each other in ways that had never been represented in a tabletop game. And I knew the communities of Disney and Pixar fans and gamers could give our board game an instant fanbase right from the start.

My first goal was to identify exactly what was making the mobile game so much fun, so that we could ensure that the heart of that experience came through for those fans in our board game. Central to the mobile game were three key things: the combinations of characters, their unique and genuine battle abilities, and sense of growth and exploration. If I could distill those three things into our adaptation, I knew we’d have a hit, not just with the fans of the mobile game, but an even wider audience as well. 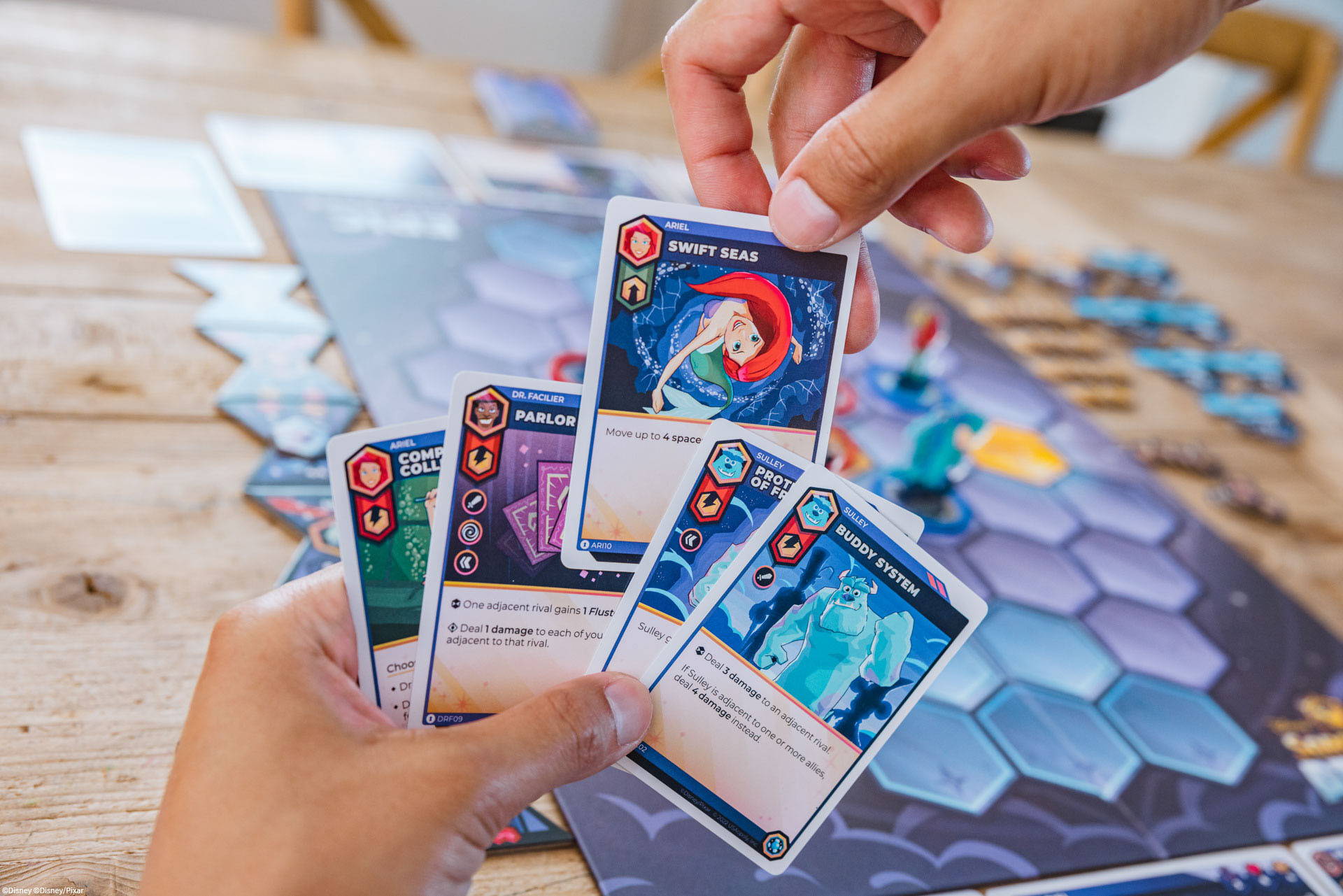 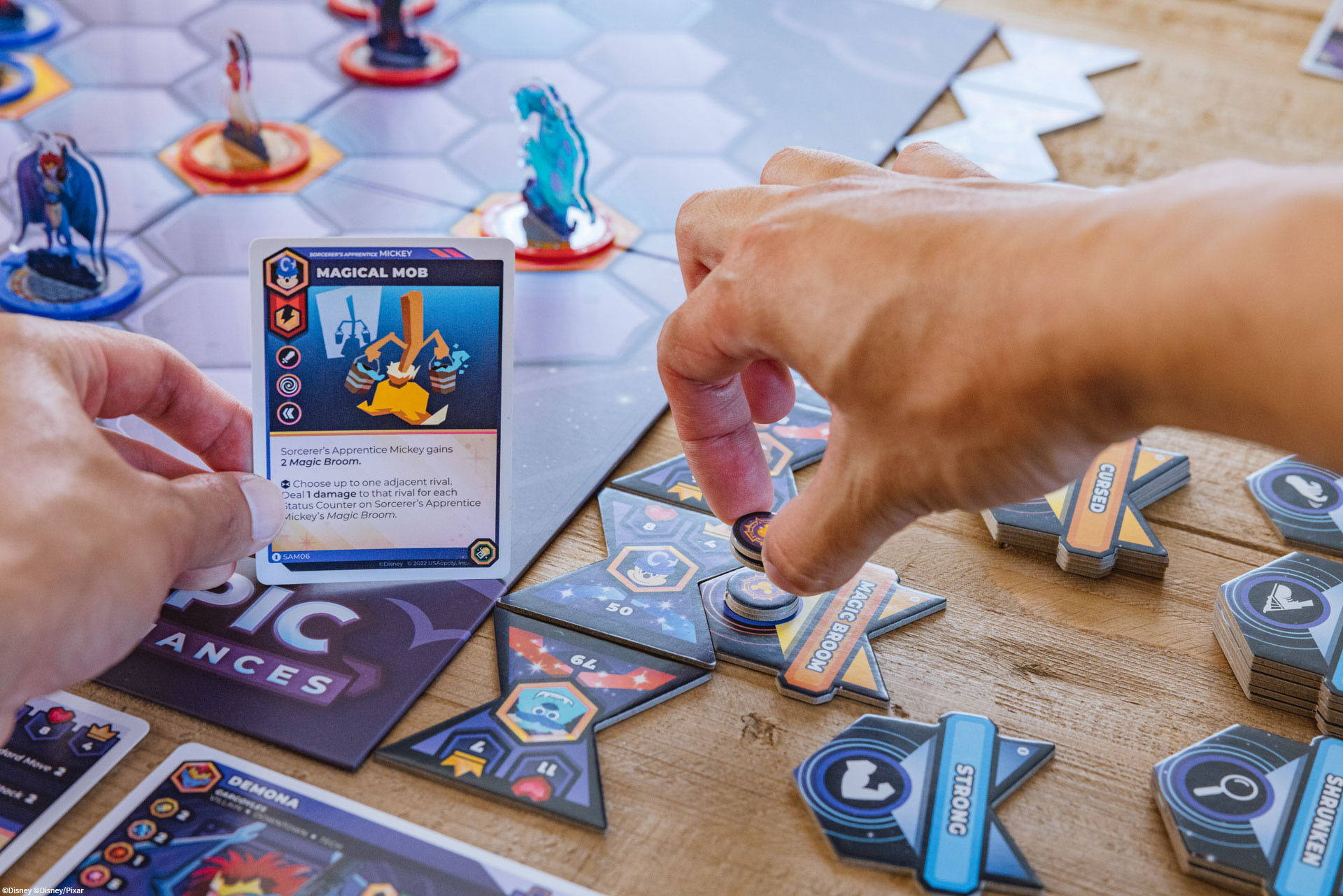 Second, I knew I’d have to create an experience that appealed to both accomplished strategy gamers and also devoted Disney and Pixar fans who might not have as deep a knowledge of these kinds of board games. Luckily, The Op has found success in the past with board games that ease players in, starting them off with the basics and teaching them more advanced mechanics and strategies as they play.

The full concept for the board game was starting to take shape. It would be a PvP (player vs. player) team battle game where two Summoners (the players) faced off with a team of three characters each. Setup would be as simple as picking your characters, putting them on your end of the board, and shuffling their decks together. Illustrated cards would give directives to the characters about their movement and actions for each turn. Acrylic standees reflecting the unique battle-ready visual style of Disney Sorcerer’s Arena would make their way around a custom illustrated Arena game board. The object of the game would be to rack up points by controlling key spaces on the board and by knocking out your rival Summoner’s characters. Knocked-out characters would be revived at the start of their next turn, so that no player ever ran out of options on their turn. 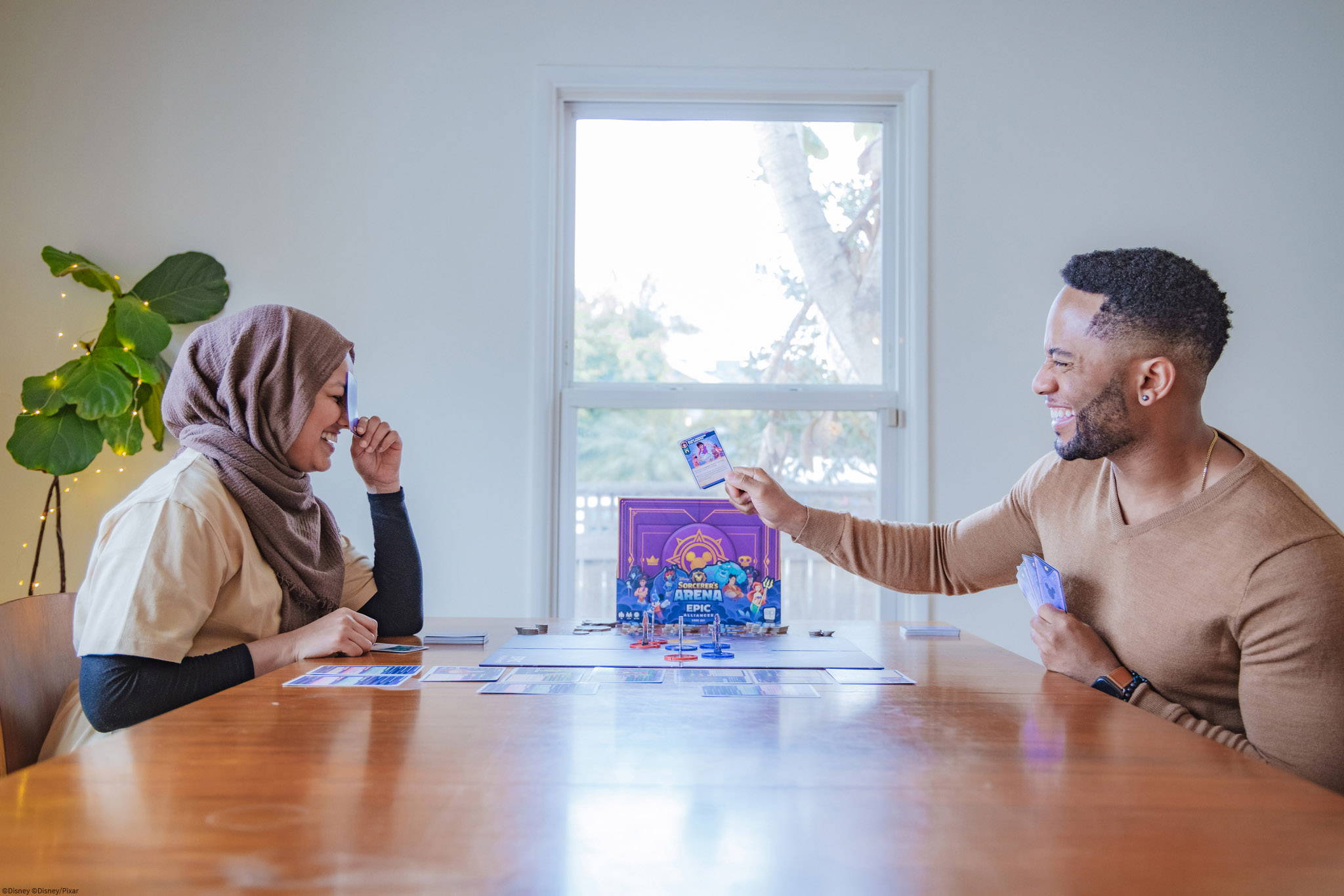 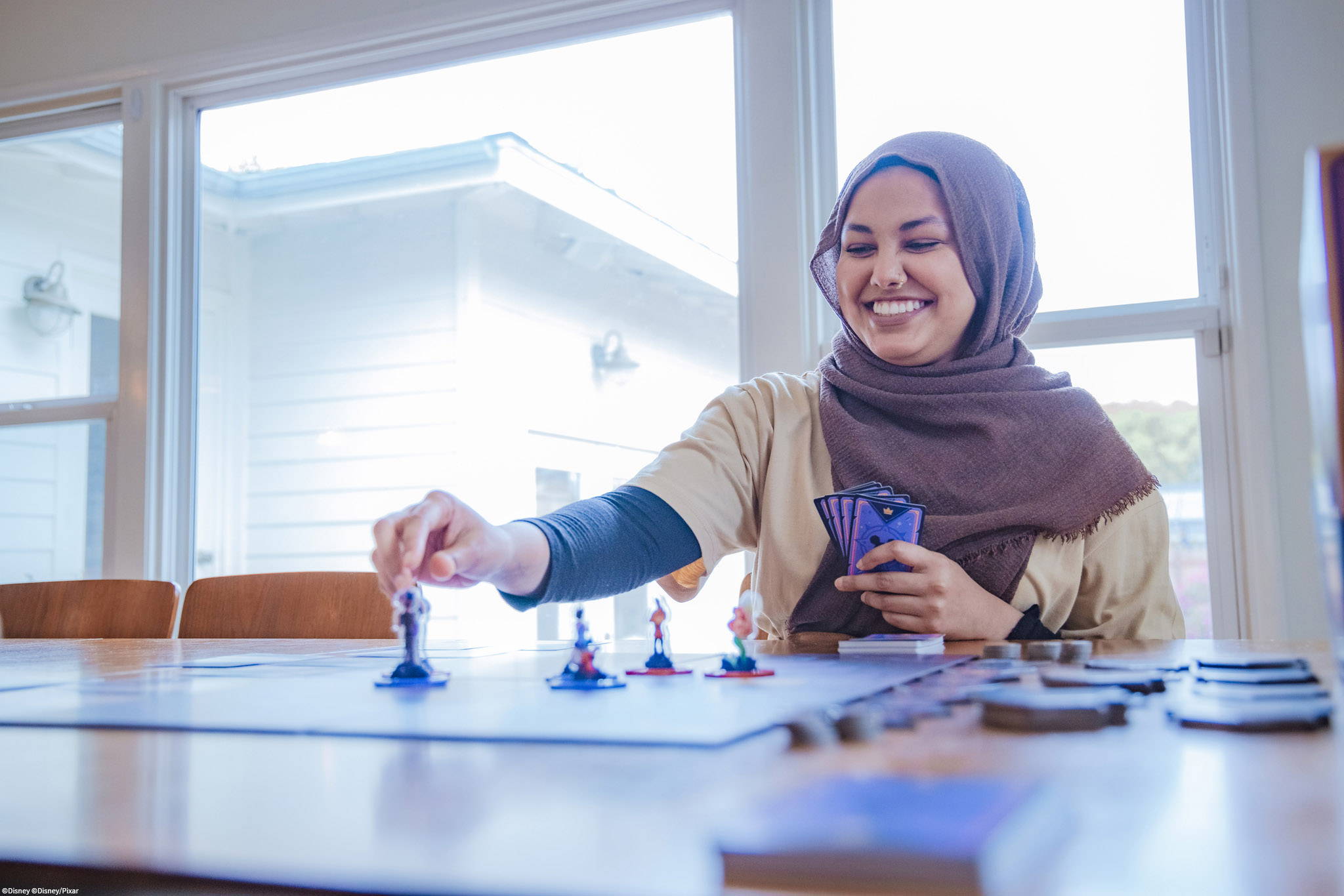 Once I had an early game prototype put together, we knew we’d need to put it through a lot of testing. In mid-2020, we’d started shifting all of our playtesting into an online system that allowed us to bring together game testers from all over the United States. We’ve been incredibly blessed to see that new online testing system grow into a robust community, connecting fans of games from The Op who are interested in whatever is coming next. Within that community, we found groups of gamers who were instantly excited about helping us refine a Disney and Pixar-themed battle board game. The reactions to just the concept of the game alone were already validating our early assessment that it would have a deep audience.

As I selected and designed the individual characters for the board game, I recognized early on that I needed to give players a wide variety of fighter styles to pick from. Mickey Mouse would be a magic user, building up a collection of Magic Brooms to take on opponents. Gaston would specialize in close combat, attacking with furiously strong punches. Aladdin would be stealthy and clever, going after the rival Summoner’s cards in hand while battling their characters in the Arena. Ariel, as portrayed in the mobile game, was going to be a healer, with several other problem-solving skills at her disposal. Sulley would defend and protect. Demona would play recklessly, and crafty Dr. Facilier would curse rivals and turn them into frogs. And Maleficent? She’d turn into a dragon and blast rivals with fiery vengeance. By combining likely (and unlikely) allies into a team, you could take advantage of synergies between characters and shore up the individual characters’ weak spots. 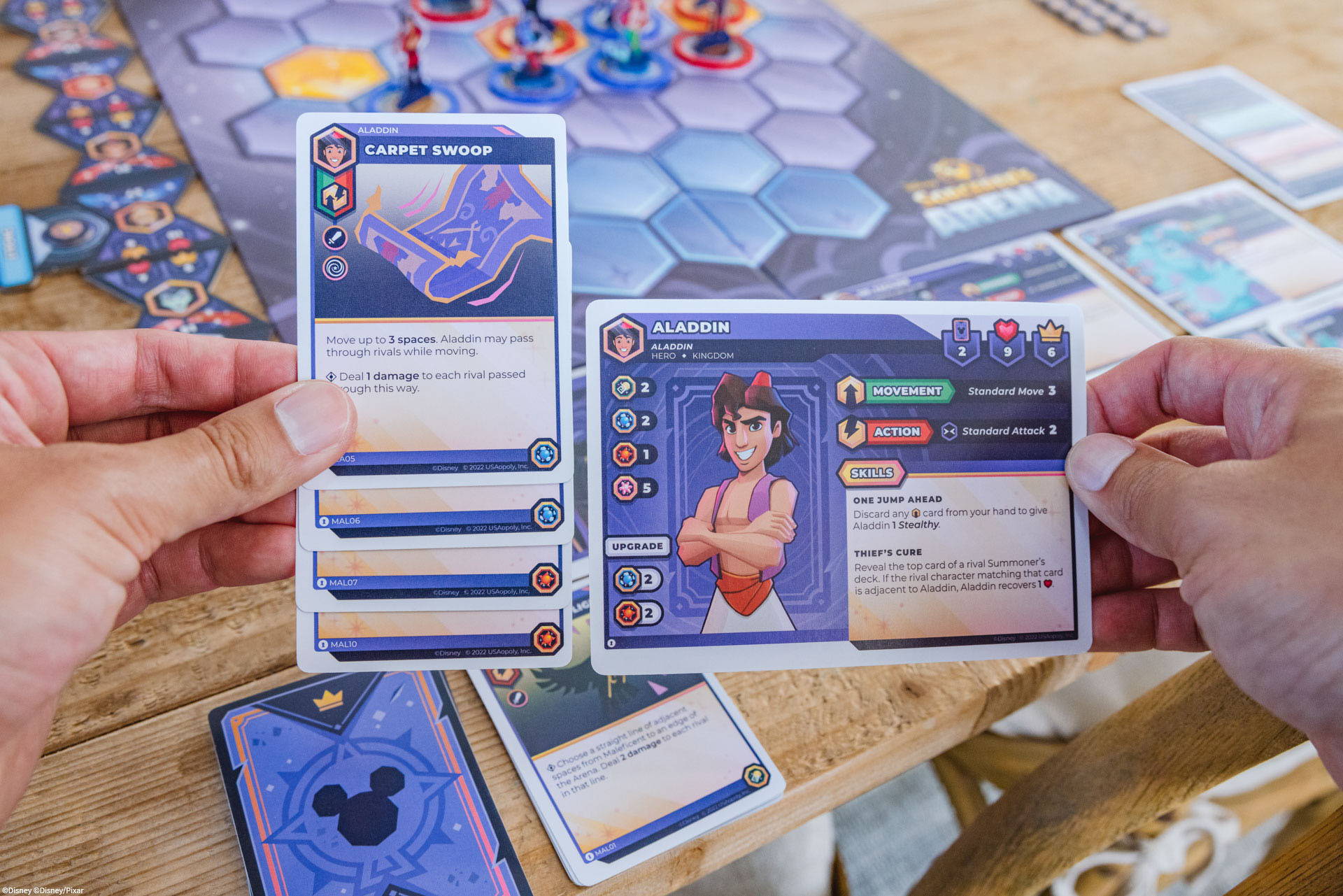 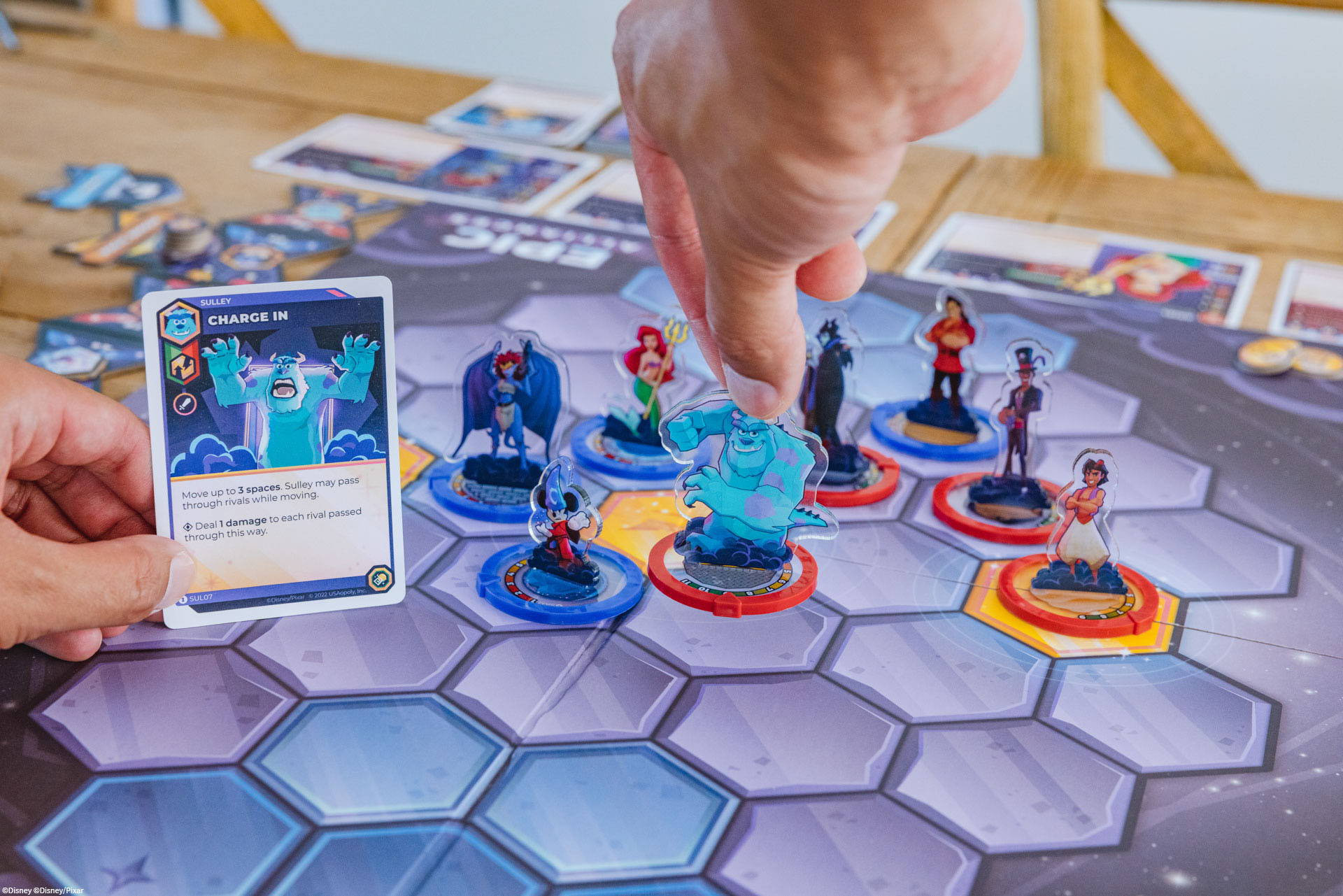 That crafting of teams is where our game’s name comes from; Disney Sorcerer’s Arena: Epic Alliances is all about the nearly limitless ways you can assemble your team for battle. And if going into the Arena with three characters isn’t enough, the game includes rules for a full-on four-player “2-v-2” team game, with each player controlling two characters paired with their partner’s two. The mix of strategy and chaos in such a massive melee is a must-have experience.

Even with all that players could do with a Core Set of eight characters, we knew that part of what made the mobile game such a hit with its community was the constantly growing list of playable characters.

That was a recipe we absolutely wanted to replicate in the board game, so very nearly from day one, we decided we’d be supporting Disney Sorcerer’s Arena: Epic Alliances with ongoing expansion content. The first expansion, Turning the Tide, will come quickly on the heels of the Core Set’s release. Featuring Moana, Davy Jones, and Stitch, the set will add new mechanics and strategies that are fully compatible with those already found in the Core Set, all built around a theme of Oceanic characters and abilities. 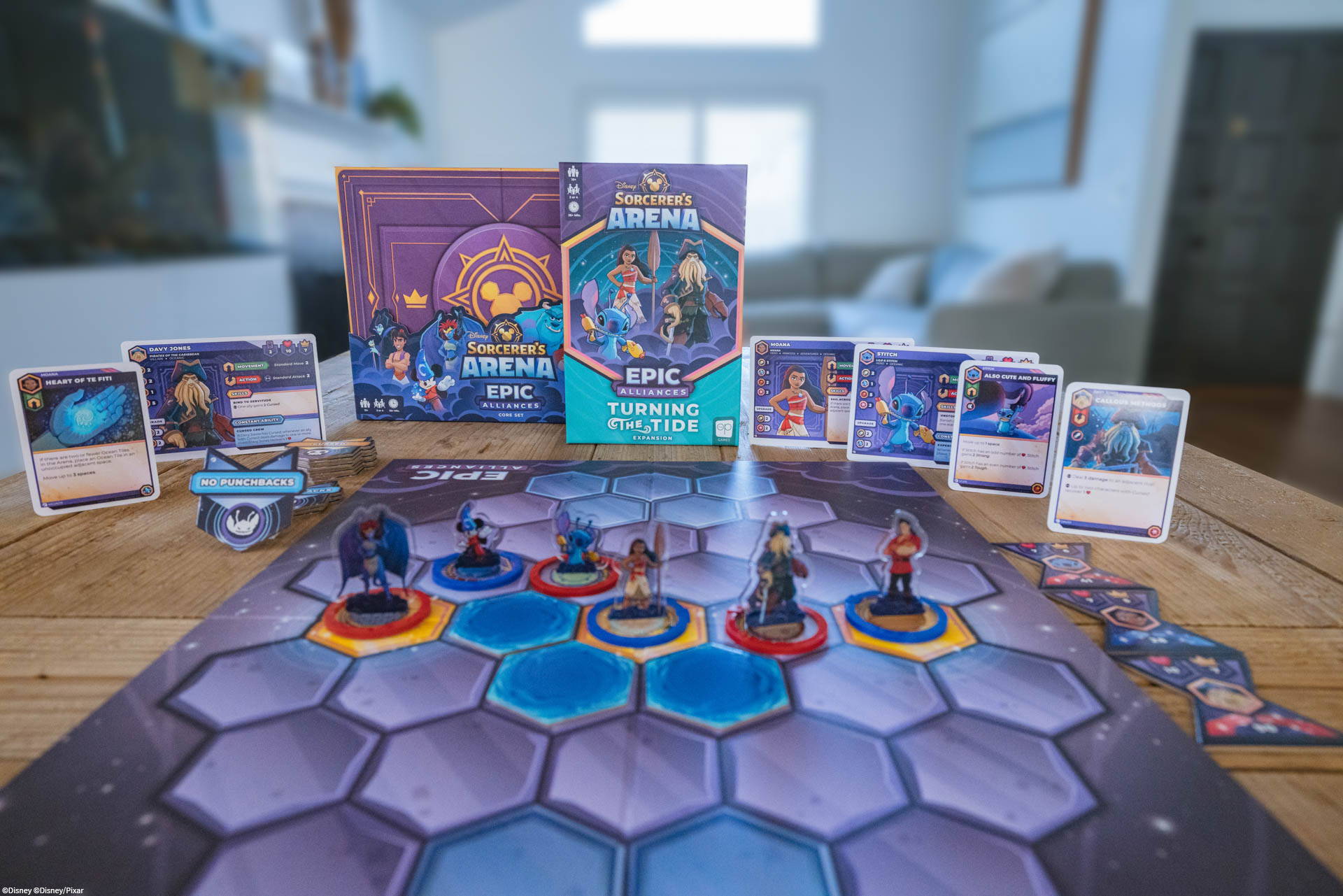 The response from our playtesting community throughout the development process has been phenomenal. Many of our playtesters have stuck with us on the design and development journey from the very beginning, and are still helping us tune the latest expansion content. Several have volunteered to help us show Disney Sorcerer’s Arena: Epic Alliances at conventions and in-store events. They’ve helped organize tournaments among the playtesting community, and they frequently get together in our online message boards to talk about the latest strategies and team combinations. Even before the game’s release, there was an early swell of love and support for this game like no other I’ve worked on before, setting the stage for a growing community of players and loyalists.

And there are plans to help foster that growth even more. We see a future for Disney Sorcerer’s Arena: Epic Alliances that includes demos and tournament play, both at conventions and in-store events. We’re building materials to help local game stores organize and run tournaments, complete with premium prize support. We anticipate partners emerging from the community producing online content that engages new and veteran players alike. The experience of Disney Sorcerer’s Arena: Epic Alliances may start at the table, but it will go well beyond it, and we’re unbelievably excited to see where it takes us!

Fletch is a Senior Game Designer at The Op whose previous works include Harry Potter™: Hogwarts™ Battle and Magic: the Gathering – Shadowmoor. His favorite games include Gloomhaven and Orleans. He lives in Oceanside, CA with his wife, their son, and a thoroughly uncooperative dachshund. When not designing or playing games, he enjoys listening to baseball radio broadcasts.